As requested, here’s the rather simple recipe to make Malaysian pancakes.

What you’d need is

Mix flour, sugar and salt into a bowl.
Make a well in the center.
Add in milk, egg, oil and water in the well.
Mix it all in together

Ok, Damascus = Syria? I know I know, Geography isn’t exactly my strongest point, I could name erm, places like Los Angeles, San Francisco in due part on Hollywood. Yes! I’m a movie freak that’s being slowly churned into a foodie as well.

No, I’m not another Michael Myers (think, Halloween H20) as this mini me here’s perfectly sane.

Back to Damascus Gate Restaurant, this restaurant is situated in the erm, remotest part of Kuala Lumpur BUT fret not, they serve up a good deal at a cheap price.

I’m all for good food at cheap prices, and I reckon, they taste somewhat better, not to mention though, my pocket does as well! LOL!

Thank goodness Lena knew how to speak/read Arabic having spent a part of her life in Riyadh.

But anyhow, the one I had which was potatoes, in onions, in erm…butter (possibly, tasted like it though), and lamb was sooooo bloody good I could go for a 2nd helping!

Lena’s shawamar was equally good tasting as well but we were floored by what came after these deliciously cooked food. Rice pudding!

That was like the first time I’ve ever had rice pudding and it tastes sooooooo good!

Can’t exactly look at rice the same way again, can I? According to the guy who took our orders ( Syrian who married a Chinese woman, adorable), he said the rice pudding is made overnight using goat’s milk and semi-cooked rice with some sugar that isn’t too sweet. Once everything’s set, it’s left in the refrigerator overnight to be served the next day.

Restaurant Interior, comfy seats (on the floor) but filled with mozzies :p

Rice Pudding on my left palm

For decoration purposes, the stalk kept falling down, and thank goodness it wasn’t London Bridge lol.
I was so excited I couldn’t snap a proper picture lol. Nothing turns me on like humour on food 😀 But these are pickles. Yum!

Shawamar goodies! Reminds me of pashmena. (I have no idea why) 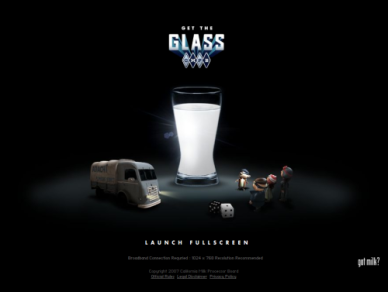 Most Americans and those who have studied advertising have probably come across the “Got Milk?” campaign which featured either things such as chocolate buttons which said, “Got Milk?” on them, or people with milk moustaches. This campaign was pretty successful, I think.

Following up on the Got Milk campaign is the California Milk Processor Board’s new advergame (online advertising game used for viral marketing) by North Kingdom, called Get The Glass (http://www.gettheglass.com) where your mission is to help the Adachi family who are on the run from the police for attempting to break into Fort Fridge to get the milk version of the holy grail – The Milk Glass. If the Adachi’s get caught, they ship you off to “Milkatraz”. 3 trips to Milkatraz and it’s game over.

I am really impressed with the quality of the game and the website. I wonder how much the California Milk Board spent on
making it! The graphics, animations and sound is really impressive, and it’s funny too.

After playing the game, will you drink milk today?

For me – nah, I’m semi-lactose intolerant! Maybe another day. :p